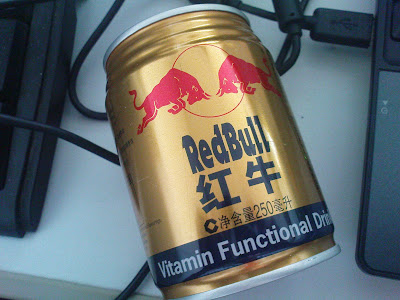 红牛 Red Bull Vitamin Functional Drink. This is one heck of a difference between the European and the Asian version of Red Bull. A very downgraded design making it actually uglier then normal, or it is to prevent that Chinese would make a knock off version and that why they made a different one. However this is not a fake version because actual website of Red Bull it self is showing this can ( redbull.com.cn). 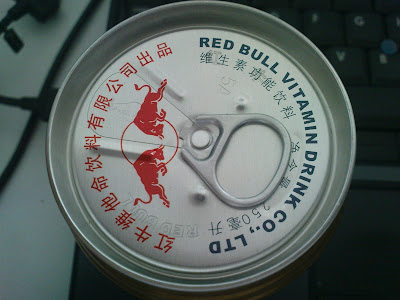 For sure this version is produced in China it self and you can actually nowadays see that most China produced still have the old pull lid instead of the normal tab. The can is from a pretty thick strong metal compared to most Europeans cans.

Not only is the can different and the graphic design but actually the drink inside it different too. You can still taste it is bit the same but it is actually less strong then the European taste which mostly makes your breath smell and people know what you drank. The Asian version actually is not carbonated and have a less strong taste. However it is more drinkable then the European version however it is not really a cheap in Asian standards but for me as an Europeans the prices here in Asia are just ridicules.

The graphic design is really bad but actually the gold kinda does have something when you look at it ,but the bad typography and over filling the can with all kinds of informations actually make it looks cheap. Compared to other packaging designs which I have seen this is one of the lesser ones. Actually nowadays the packaging design in China are not that bad, I never thought I would say it but they pretty much stepped up. But I am not sure if they are designed by Chinese designers or actually hired design agencies from Australia instead.

I thought the groves on the sides had a special message for the blind but it seem here the cans are bit randomly used, because I thought they said which are beverages and which are beers or which are carbonated and which is not. I think I need to look better in the superstore next time because I remember during the Golden Nut award that the side grooves had a certain meaning but not sure which is it at the moment.
review