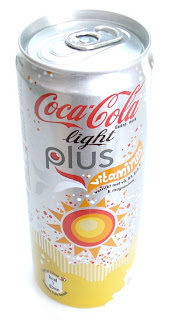 Yesterday I came back from Belgium and bought few packages that I haven't seen in the Netherlands before. I first saw advertisement of this new Coca Cola drink on few poster and so I went to the supermarkets to buy it. On the can it says it contains healthy vitamins and that's what the plus stands for.

Now for the taste, it actually doesn't taste bad but it actually taste almost like nothing. It have a very light coke taste, but might be me because I never drink Coca Cola light. However it's easy to drink and not like you need to take small sips but you can drink it easy with big sips of it.
review