on April 08, 2008
Last time I posted about QR code but now for the normal barcodes. Normally when we look at them we know it's an important part of the buying procedure. Cause the cashier need to scan it to know what it cost. Only thing normal costumers look at them if they are not damaged, so we don't have to wait for someone to fetch one with a scan able barcode. We all know them ass dull stripes with few numbers or letters under them. But lately there seem to be more fun and design added to them. Some of you might have seen these mostly around Japan, but also on some magazines in the UK. 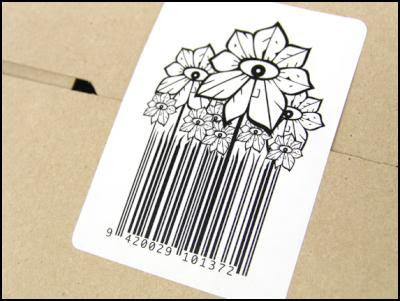 For packaging designers this might be something we want to look at, to even ad more graphic design to the packaging. I think eventually we could even make this a standard to make them to flow with the rest of the design of the packaging. However we must not make it to disappear, making it much to hard for the cashier to find the barcode. But however the numbers do really reveal where the barcodes are, if you make them blend in to much with the other graphics. I might make something with this very soon showing how you could also import the barcodes with the rest of the design, instead of adding design to the barcodes.

Different point of view
From a cashier point of view, you need to place them most avious places, where they know where to find it. I know I've been a cashier at a mega store for a few years. And I also know allot of designers dislike the looks of them. But I don't think it's always the best to put the barcodes on the bottom of the boxes or at places where they don't disturb the design of the rest of the graphics. But best packages don't have the barcodes on the bottom but more on the back, front or sides of the boxes, because the costumers always want to hold the product straight up with the bottom down. This means when the barcode is on the bottom the cashier need to tilt the box to scan it instead of just shoving in front of the scanner. And you might scare the costumer with rolling over a box of cakes with a nice topping, to scan a code that you can find on the bottom.
guides