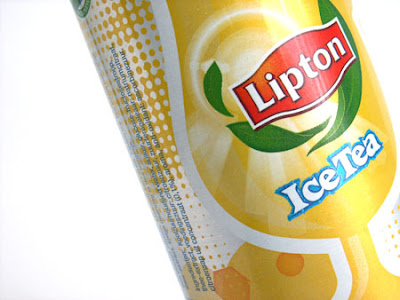 I was tipped by my sister that an aluminum Lipton Ice Tea appeared in a store called Xenos and she bought one for me too. I also went on search on the Internet for pictures are any news post about this new bottle, but there is absolutely nothing about this. And I am probably the first person to write about it and putting picture of it online. 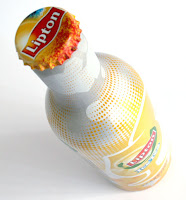 And it seem this design was specially made for the Dutch audience and use the Xenos store as a test ground. And also saw the store had more test product because I saw allot of things including candy and other things that were tested if people would buy it. I saw Mentos with special flavors but the packaging were from Japan, so I directly saw it was a test ground to see if this taste would be bought by the costumers of non Asian grounds.

The new packaging is from 100% fully recyclable aluminum, it uses a crown cork cap so a bottle opener is required if you want to open this bottle. In this aluminum bottle first only 33cl of ice tea and not 50cl like normal PET bottles. The bottle is made with a pretty hard thick aluminum, you can't actually squash this bottle like a normal can. This might be something they should look at, trying to use less thick aluminum instead and lowering the cost. Also change the crown cork to a twist so it would be recloseable and easier top open without a tool.

The graphic design is quite good, using a halftone

background and using different overlapping geometric shapes. The silver is from the aluminum self and is not sprayed. And the an outline of the Lipton Ice Tea glass shape with the logo inside it. Only thing what is not that good, is that the clear coat wasn't sprayed over the whole bottle. If you look at the pictures the neck of the bottle is mat while the rest is shiny. The are actually 5 colors inks used plus extra clear coat. The background a transparent yellow. For few background parts, logo and the glass a solid white. Solid green and red for the logo. And solid blue for the information text, barcode and logo. They actually applied the colors in few stages if you look carefully at it. First the prefabricate the bottle is printed with an offset with yellow, white and red for the background. When that was done they blow molded it, not really sure of that but it's possible. And after it's molded the a bottle shape it with be printed on again, but this time the detailed stuff like the text and logo's. And when that was done they finished it with a clear coating to make it all shiny.

The bottle actually give a bit of metal taste actually if you want to drink directly out of the bottle. I recommend using a cup or a glass to pour it in first and drink from that. The only produced this packaging for the sparkling ice tea so it's better to have it chilled before drinking it. Cause I opened one without chilling it and it taste not that good.

Update
A rectification of the post, because I found some more information about this bottle. The first post of it was actually already online one year ago. The bottle is actually specially made for horeca uses and not for actually selling in stores, so I am not sure what happened. They also were announce to be available in half of April, but the bottles I bought had an expiration date of 05-2008 so these bottles were actually close to expiring this year. So they were actually bottles made in 2007 because normally the expiration date of these kind drink are about 1 year. Or these were unsold to the horeca and flunked or the first batch they forgot in the back of the storage and tried a test in a store. Also something interesting is there is a commercial made by ON that I have not seen on TV actually. The commercial look pretty sleek but it doesn't really show too much of the bottle. It only show bunch of people holding the a bottle and only see them as shadow figures. Watch the vid and see it for yourself. Click this link to see the video.