I've read an article about it about half year ago which the teacher showed at school. This new design shows a new kind of cap on the aluminum cans, which can be reclosed to avoid flattening soda's or spillage. There have been allot of designs over the couple of years with the same idea to avoid flattening. But many designs uses a extra thing you need to carry around extra to attached to the cans. But this new can is designed by a Dutch company 4Sight Innovations which is stated in Alkmaar. And the first company to produce them is Ball Packaging which aims for producing cans for different beverage. You can find the new Coca-Cola energy drink Burn with the new can in France. And also Coca-Cola's regular Coke have also gotten the new cans but it's only available in Germany. The test area is in Europe instead of the big and most soda pop drinking culture in America, it's because the people in America are most likely to drink up a cans in one time instead of keeping it later to take another sip. However I don't really understand why they added it to Burn because it's an energy drink which most people drink up at once to have energy to sport or do other things. But I would have thought they would produce on Coca-Cola Light first because the ladies would rather take small sips and not drink it in one time. And also they buy bottles faster than a can because know they are recloseable and are handier to use. 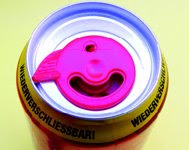 I can see it easily become a standard and become a competition against the PET bottles, because mostly people nowadays buy the bottles because they are easy reclosable. But also when you look at the materials its made out of the cans is much better for the evironment. Because the aluminum cans are 100% recycleable and can be subtracted from the other garbage unlike the plastic PET bottles that come in the normal garbage. And maybe a 500ml cans to replace the bottles with this new design.

However I haven't gotten one in hand yet at the end of this moth I will be going to Interpack Trade Fair in Germany to see what kind of new packaging development there is and also look if I can find some cool stuff when I want into a supermarket there.