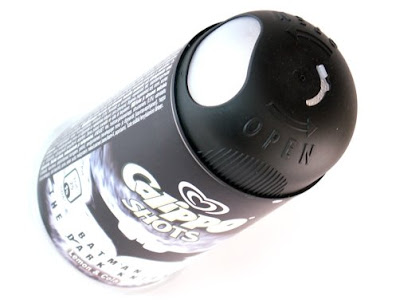 It's been great and hot weather for a quite while so special ice cream packaging could not be left out. Today just spotted first glimpse of the Batman the Dark Knight advertisement in the Netherlands on the Calippo Shot bottle. Still not sure what's the best way to eat it though, because it always melt and you can't get the rest out of the bottle. Also not sure but this is only ice cream where my mouth get numb from eating it. However apart from a numb mouth it a quite tasty treat and wish they provide something to get the last big out easier. 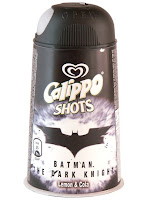 From just looking at the bottle aside from the graphics it actually looks allot like a trash can. Seem to be eating junk hehe. Ok now get serious, from graphic design aspect the Batman logo looks cool and that's just about it. It further got totally nothing to do with Batman on the rest of the design only that it's black. Only wish they did something more with the graphic design because it really lacks action and Batman. And it got further no special surprise or event, plus I am missing a link or url to the Batman the Dark Knight website or anything else that got to do with this movie.

An idea to make it but cool would been that they adapted the Ola heart logo so it's shaped a bit like the Batman symbol. Also they should have moved Lemon and lime to the middle because it does not fit between the Batman title on the bottom which use another typeface and color, it would been better if they set it just under shots. Maybe when I have free time I should photoshop something that I think would look better on this, because Batman deserve something much more cooler than this.
review