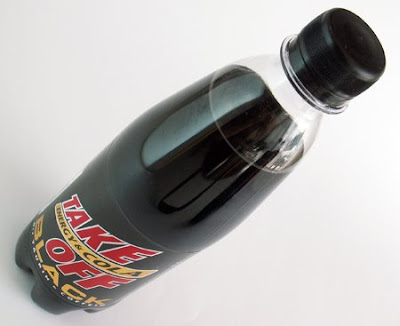 I also bought this in Germany but actually I spotted on the label that this is produced in the Netherlands, however I never have seen this before. Probably sold at certain places or is tested in Germany not sure which.

The taste is actually Red Bull mixed with Cola, but actually it taste more like Red Bull then Cola. Would been better mix if it was the other way around. But seem this is probably why Red Bull is also starting a mix with Cola.

Seem to be trend to mix up beverages to get new taste. Probably need to try Red Bull with Fanta or 7up and see what that taste like.

Really like the design and probably it is really something for Germany that they don't illustrate the design but use a better typographic use of the text. However it work quite well for this design and also a less is more design. However not sure what kind of region they are aiming with this drink, it doesn't look really trendy or hip or aim for refreshment for sport. The color sheme seem to be bit taken from Mars with the black, white, red and gold.
review