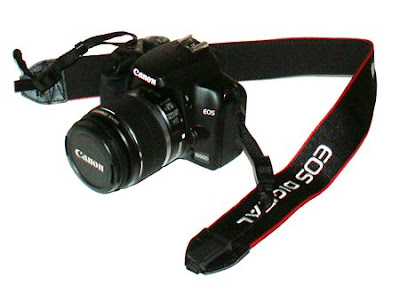 First DSLR camera for me had been working for years with my trusty Minolta Z5 but now was really the time to step up. However I think some might think why 1000D and not 450D or any other DSLR. I had actually searched every review and done many thoughts about which one to choose, but I thought the best is the 1000D.

First of all the 450D had had added functions which I wont need or use, but would only been buying it for the extra pixels. I also went testing the camera at a megastore, which one I could get best focus on things and how to check it fast. I pretty fast found liveview is pretty much a must with extra zoom to see you view in 100% to be sure it is sharp. I had problems with my Minolta Z5 which I saw it was sharp on my cam but was very blurry when I was home because you can't do extra crop zoom te check the sharpnes.

Because I do allot of product photography too I had to have an remote and also extra to check for even more sharpness. The PC remote software was another must so I could easily setup my camera on a tripod, can liveview on my laptop and tweak the zoom on my laptop. Also the shot will be sharp because my camera won't move when I press the shoot button. Also directly save to my laptop which other brand doesn't provide such a software and the old 400D doesn't have.

Also I found a place where I had bought this for a major bargain. The total cost of the Canon EOS 1000D with IS kit lens just costed me 439 euro, while other stores sold it for 460 euro or some still with prices above 500 euro.

Will soon show some photo that I have made with my new camera and I also openen a FlickR account to send my pictures too. You can see it on flickr.com/photos/chungdha.
events