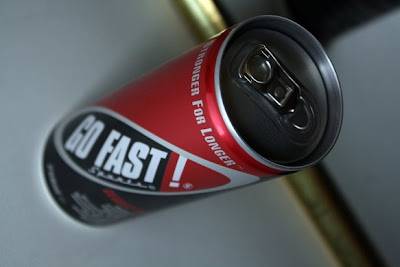 Go Fast hits the Dutch supermarkets and also Europe. However not sure if it was already available anywhere else though in Europe, but for sure it is a first for me to see it in this part of the world. But Go Fast had sponsored few events in the Netherlands. But haven't seen the sell or actually give away free test samples though. However it was available to buy it off their website.

The drinks are produced in the Netherlands and Belgium and under authority of Go Fast Sports & beverages, Co Denver. But however it is producer here in the NL, it aslo looks different to the can I saw on the Go Fast website. It has a new slogan instead of pure energy it now says stronger for longer, sound bit naughty if you think of something else. And no light version yet, so sorry for people who to drink diet version. 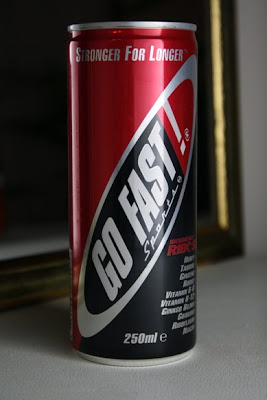 However the photo it looks quite well, it is all due to the lighting. The red ink they use actually isn't really good red and is a bit pinkish, might be cause by the transparency. The black they use is also a bit transparent and because it is transparent it is a darkgrayish look and not black. However this could be easily change by better choice of inks or prints.

The taste is really superb, and especially I think most Dutch people already know the taste from another beverage. The taste is close to the by Coca Cola produces side brand Fernandes cherry flavour but with a tint of Red Bull. However I do prefew the Fernandes more though. However if you would ask me to choose for a Go Fast beverage or Red Bull now I would directly say Go Fast Please! But to explain the taste is it a bit of candy like flavour and a certain kind or cherry candy flavour. 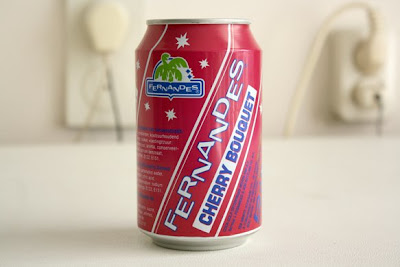 Fernandes is a very odd brand it actually is a very tasty drink which was made in the Republic of Suriname and later came to the Netherlands because of the linkage between the two countries. However this brand always been sold on these two countries and never been released on other countries.

I think with a bit of restyling and rebranding of Fernandes it could be a great beverage. Also they need to lay down on the color agent in the drinks, alway get a coloured tong when drinking it.

Conclusion
Go Fast is a really great tasting drink too the energy drink section of the supermarket. Also set them self apart by having a own flavour instead of having al of them tasting like Red Bull. Also it is easy drinkable and can go down the hatch in one time. But they need to do bit more on the print inks and design, because now it fits more next to the cheap brands than being next to the top energy drinks.
review