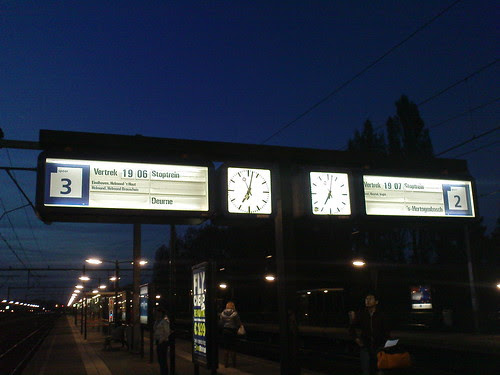 This isn't a photoshop, I took this picture this week on a trainstation in Eindhoven and saw odd stupid design. Two clocks next to each other and having backlights, using unneccesary energy to power this. While they could easily just put one clock in the middle instead of two.

They got more on other stations, need to take picture of those. On some of the trainstations they have info poles where you can press a button to ask info about trains or how to travel. But some dumb guy made an extra pole that looks the same but with just one button for help. While they could easily had alter the other put by putting the help button on it. Will take a picture of that some other time.

Idea
I notice train stations use unnecessary amount energy at night. Look at how many lanterns are used on the back of the stations. While only small part of the stations was used. However my idea is to use sensors which use less on the energy. So only partial of the station would be using lights and also less energy.
review