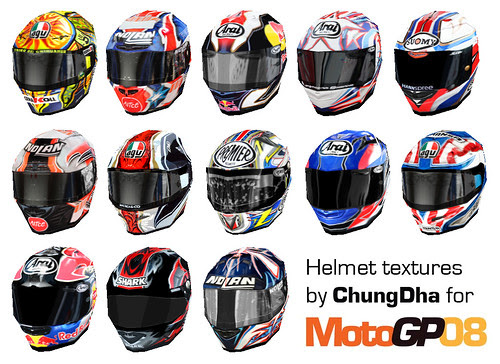 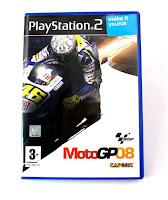 These are low resolution helmet texture I made for Motogp08 game, these skins are used for the Wii and Playstation 2 versions of the game. So if you have this game you might be riding or see them in the game. You might have seen a different rider on the box of your Motogp08 game, this is so each country get the rider of their country on the box. However luckly we did not get Hugo Van Den Berg for the Netherlands, but Valentino Rossi. So if you are buying one in America you would get Nicky Hayden on the cover, Austrailia you get Casey Stoner, Germany Thomas Luthi, Britain James Toseland, Spain Dani Pedrosa and most be getting Valentino Rossi.

All the textures are used on the same 3d helmet model, however by skinning / texturing differently then the standard template I gave the correct as possible shape and look of the real helmets.
Also I used a different method then other game texture makers. A normal texture designer normally would use Photoshop to paint the design and mostly cost allot of time plus the details looks very cartoon like and misses just a part or realism. I use a method that is developed over the years for a game called GP500 at Gp500store and also learned from a friend called GAP. The method uses high quality photography and using the best features of Photoshop to alter them into a texture, by doing this the texture looks photo realistic and that is because it is made with photo's. This way also takes less time on helmet with allot of little details like the helmet of Valentino Rossi.

Here you see the a high resolution version of the texture. I always work from high resolution so I can work on the very tiny details to be correct, and then resize them to a low resolution and it will help the so great details when it is resized smaller. Hope to help out more in the future editions of this game. Also need to see if I could see my name displayed in the game.

Many thanks to Capcom, Milestone and Arkady giving me the chance to help out with Motogp08 and making a hobby into a job. For more info about the MotoGP08 game visit Milestone website, also you can download wallpapers of the game covers and see ingame screenshots.
gp500

Anonymous said…
great work as always Laz,
i'm really happy with you too.

Unknown said…
Nice, any chance you could do some for the PC version? Also could you explain your method for converting photos to textures please?
13/11/08

Anonymous said…
Really impress, congrate for your amazing stuff!!!
i saw on faster some bike skins made for moto gp08, so i hope, if it's possible find a tutorial cause i want to realize different personnal skins for this excellent game!
congratulations....again
kelnor34
14/11/08

How to import Preset in Adobe Premiere Pro

In this video I am showing you how to import a preset into Adobe Premiere Pro. A preset is actually the same file for both Windows and Mac, unlike plugins which are computer specific as its has to do with programming. But a preset is a safe file of settings from Adobe, that why the same file is compatible on both platforms. Also there is only one method of importing a preset, so follow along with the video above to learn how to import a preset.

In this video we are teaching you 2 methods of fading in a Logo or Text in Adobe Premiere Pro CC. First we are showing a very very quick way that uses the Default transition short cut that automatically adds an IN /OUT cross dissolve to the text or Logo. The 2nd way we show you a more professional cinematic fade in method with key framing a ramp speed and adding also a blur dissolve using Gaussian blur.

If you appreciate what I do, you can support me by donating any amount here on paypal:
http://paypal.me/ChungDha

For any Questions Please Join our Facebook Group: https://www.facebook.com/groups/chungdhagroup

I am bringing Clarity to Adobe Premiere Pro, it's something I have been missing  as in Lightroom I often add clarity to improve the looks of my photo's, but even with the latest version of Premiere Pro CC 2018 where they have added shadows and highlights and such, but the clarity effect still was missing. On my own found a way to create an effect that is quite similar to Clarity.