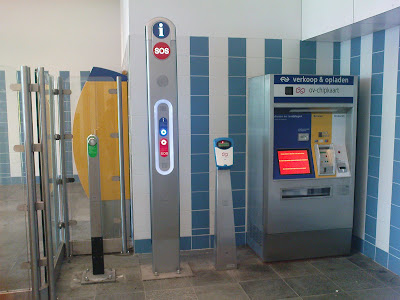 Here is a stupid looking part of the train station this is in the main hall you see 4 things standing. One most left is emergency button which could had been easily be integrated in the second pole though. The emergency buttons open up the gates in an emergency situation. A smart person would had merged this with the SOS button on the second pole, then having to make a single pole with one button and two wires running through it. It is really using unnecessary materials, space and money

The 3rd pole is most ridicules it is a check in pole it is not handy to be put in this corner. Also it not really in a way that would make you walk fast in a straight line to the trains. I you are in a hurry you need to run in a odd way, also it is bit hidden away in this station compared to the other ones. The other stations have this placed on more visual and easy seen places. Also odd is this one is blue and blend away too much while most I have seen are yellow.

The 4th is totally ridicules that box is to load up your prepaid train card. So what is the problem this machine is actually behind the gates. Which mean when the gates does work and you don't have enough money on your train chip or prepaid card you can't enter through the gates. And there is no way you could upgrade or ad money because they misplace that machine on the wrong side of the gate. You might say the yellow box behind the glass fence is the ticket machine, yes it is but for normal tickets, with that machine you can not upgrade or add money to your prepaid card.

Really allot of the train design in the Netherlands are really lame and stupid, never thought good about. A funny thing I saw this week or actually odd thing is a Doreamon graffiti. 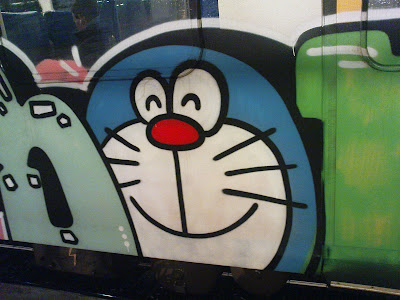 You might think why is this odd, it is odd because Doreamon never aired on the Dutch Television. And most new generations Asians here are too young to remember or still know this character. However it could be if the graffiti painter is from Japan, because Japan used this character before for an championship. But still wonder if the person who painted this is a girl or a guy.
review

Unknown said…
It's really nice to have access to a prepaid card in the train station though, right?
8/12/08

Chung Dha said…
The Dutch stations are less well though of then the ones from other countries like Hong Kong which have the best one I have used.
8/12/08