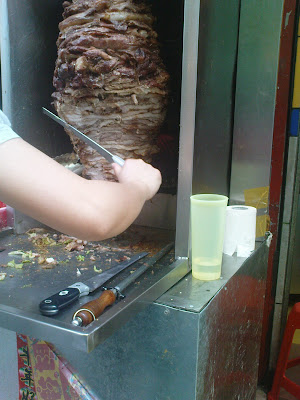 I would had never though there would be a Kebab ( or in Dutch we call it Shoarma) in Shenzhen. Also pretty much first time I saw a Kebab with a Chinese chef instead of an Arabian. Kebab is also somethings you see in many places in the world where there are allot of immigrated Arabians who open such places to eat. Also in many places in the world you have different well know dished of Kebab, most of them developed locally. In the Netherlands the most well known is called Kapsalon ( which in Dutch means barbershop), the dish is pretty unhealthy but does contain allot of super delicious stuff thrown into one pile. The Kapsalon has one the bottom layer frensh fries, with lettuce above it and above that kebab with molten cheese, then eaten with allot of BBQ sauce or salad dressing. The idea was actually to put everything you like just into one pile and that just became a famous dish in all the Kebabs in the Netherlands. Enough talk about the Dutch version not the Chinese one. 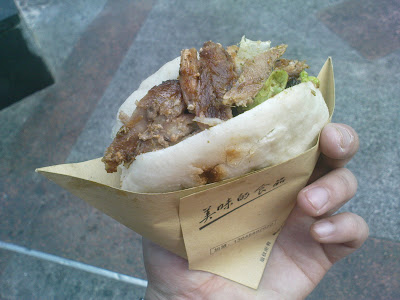 Chinese Kebab, as you can see it is a pita bread with kebab and lettuce. And they did not even have the usual salad dressing sauce of hot sauce. As for the hotness it is pretty spicy the actually mixed it with some super spicy seed which actually clouded over the meat taste which I actually did not taste at all cause of the spicy seeds. The pita bread looks like a pita bread but actually is the same doug like and bao poa, it was heated in a ricecooker which was pretty odd. For the way how they sold it is pretty unique because you actually bought that small bag from one person then stood in a row till you get your pita with kebab. But I rather eat the Dutch version and especially the Kapsalon / Barbershop. 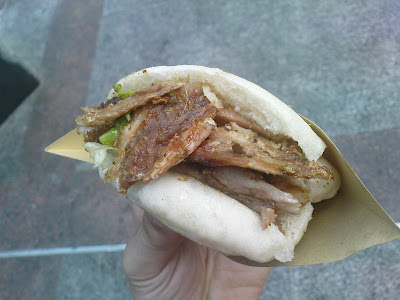 I don't see this one going to be a hit, cause really the taste is just too clouded by the seeds. Now after few hours I can still taste those seeds. I think they need to tune the taste a bit, because I think most will it just once because it looks rather special and pretty much get good attention where they have stalled, but I doubt many would return for a second. Rather buy grilled corn on a stick from the guy next to him.
events review