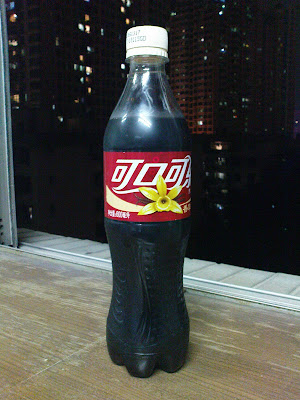 Atleast I think this taste is Vanilla, at the moment I am reporting from China Shenzen and really when you were in Hong Kong you can still read English on any label, when you just cross the border to Lo Wu and go into Shenzhen everything is in Chinese. Even the most known products are lost most of the English discription on them.

Here I have an Coca Cola bottle and you can see it does not have the Coca Cola logo we all across the world know but a Chinese written one. Only the nutrition and the copywrite are in English on the labels so if you don't know Chinese and you have certain food allergies you have to look out or ask people what it contains.

I said I think it is Vanilla because I can't read Chinese but the beige cap and taste are the same like the European version, but I have never seen that flower before. However I can recognize there are some vanilla sticks growing on the side of the flower. However the design here looks much better then in Eurpe a much more expensive label print, it actually have little bubbles printed with 3d hologram inks. When you move or rotate the bottle you can see them relfect the light in a certain way.

Actually the designs are not that bad here, however might not be designed in China but somewhere else, but they are sold in China and allot people here do like designs more compared to the Netherlands. It is kind of the opposite compared to Netherlands. In the Netherland we got allot of top designer but people don't care about the designs, in China they have poor or less good designers but people appreciate good designs more.
review