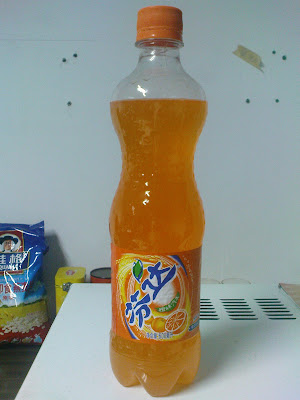 芬达 Fanta, actually it is not that different however they are still using the old graphic and logo style while in Europe we have the new upgraded version of Fanta. The big difference is pretty much in the beverage itself. As you can see the orange is pretty dark and pretty much is a very chemical color, if you would compare it to the European version which is less dark and more yellow orange tinted. Also the tast is pretty chemical compared to the European version the orange taste is just aweful, you are actually just drinking chemicals and nothing natural about it. I doubt they used any oranges for it at all. But pretty much of the Coca Cola beverage which should contain fruits are utterly chemical while in Europe they are much better. If you drink allot of different Fanta drink China or Asia would not fit you well because the taste is just very different and bad. Also I won't be buying another Fanta drink soon unless they come with some special edition, the Japanese one which had a special bottle was pretty cool but the taste was equally as awefull.

Actually there are allot of Japanese imported beverage and product with pretty interesting packaging however I won't be buying too much because I have to watchout not to be spending too much.
review