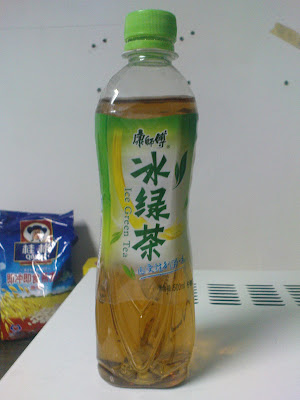 冰绿茶 Ice Green Tea, for the moment I am trying to learn to write Chinese a bit so if you see block it means you don't have Chinese letters installed. A few post ago I have said I can not read Chinese so I don't know what flavour things are, I thought I should try out some of the healthy green tea drink and try out some tast this one I though looks most safest from the gentle colors and not really showing any odd ingredients, well I was pretty wrong about that. The taste of this green tea is actually same taste like the dried Chinese prumes which is not really a certain taste I would want to have in a beverage form.

However it is pretty healthy in a certain degree but not really my taste of drink. For the design it is pretty simple but the added English text does not fit in well with the overall design. It is actually pretty difficult to combine Chinese with English and to be able to make them look fitting, because they are both a different language and also the font are no universal fonts that work best together and looks well.

However I would not dare to take up the challenge of actually making an Chinese Character font because they have 3000 characters and that would take a while to make them all. However I have never seen how they make the fonts, it might be less work because 3000 would take a long time to make.
review