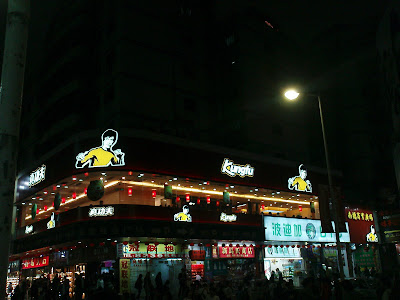 Pretty sad seeing Bruce Lee miss used by people, I actually saw this already on the net, but they did not show what they actually serve, but now I had a first hand look inside. Ok, from the looks the placement and everything inside, looks allot like any other fast food restaurant like McDonalds, KFC or Burger King, untill you come to the counter and actually see all kinds of rice diners. My not knowing what the menu's are called or what is inside choose one they pointed that was in a special and was discounted and get free extra dishes in either mushrooms or congee. 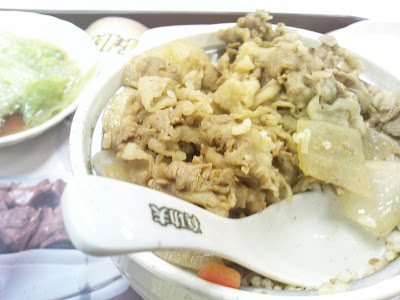 The bowl you get is pretty big actually, not sure what the meat is but looks allot like bacon and it had bot of veggies under it and allot of rice. On the side there is a dish of veggies and also with mushrooms but the mushrooms were cold plus spicy, so I did not ate much of those. Actually this is not that bad and also not really that expensive because I paid 23 yuan for this meal. And I can't say that this is unhealthy because it is pretty much almost a normal dinner, plus much healthier than all those fried stuff from McDonalds. 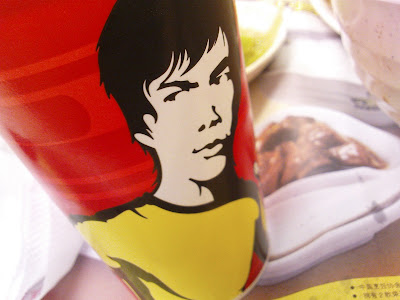 Lets not forget about the beverage you get with this meal I could actually choose for 3 yuan extra for a soup but the standard drink would do, because the standard drink with this menu is hot fresh Soya Milk and it pretty much one of my favorite drinks in China. However they did not use a handy packaging because they pretty much had a standard like other fastfood beverage cups with a lid that did not have an hole. Would be great if they use the same lid that Starbucks uses or a stronger kind of cup, because the cup flexes and when you hold it. 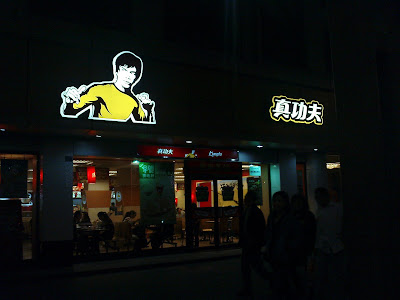 Ok the dude face does not really look pretty simular to Bruce Lee but it does represent him in a certain way. However inside the you can see better design which does look like the real Bruce Lee. I am sure I will visit these more often when I am here in China Shenzhen, for sure ordering meals is much easier and also super fast within a few second I had my meal compared to other restaurant where you have to wait for ages.
events review