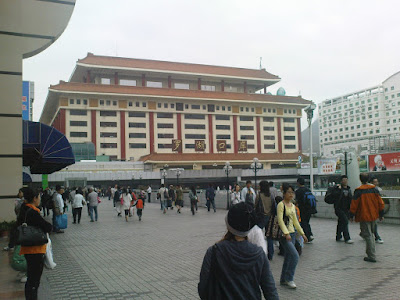 This is Lo Wu station where you go out from Hong Kong or go in From Shenzhen. It is a pretty big building, however I am not so sure what there is in the top levels, one thing I am sure of is that you can get or buy a short Visa there for 5 days fro 160 HK Dollar. 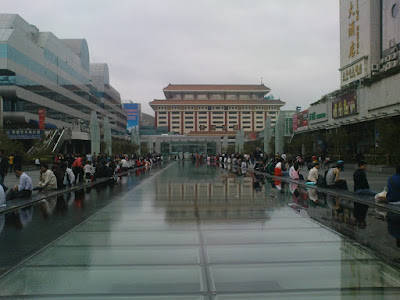 A bit further outside you have some pretty things they however a bit clouded by hundreds of people waiting for their next train further into China. There are allot of pretty things build around the station but really just hard to see cause of the crowd or people sitting in the way.
Left you see a big building that is a prominent place if you want to buy knockoff of anything. You get thrown with tons off fake Rolex. However they still got some decent things in the building I found one shop which sold pretty good looking cycling clothings, but from everything you could buy I think most of the clothings are safe compare to the fake electronics.

There are tons of fake iPods and iPhones there and you don't believe how silly some of them look. However between the silly ones they actually got some realisticly looking iPhones however I don't know if they work at all or that they just play a silly game instead of being an actual phone. If you want to buy electronics you should go to Hong Kong, first they are real and second the real ones are more expensive in China then in Hong Kong.
events