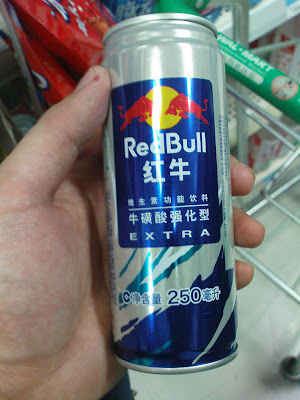 This can looks much better then the previous post about Red Bull in China. I like this design much better then the golden version, however I did not bought one and taste if because I should be only spending on stuff I really need and this ain't cheap compared to other drinks or beverages. You could buy several bottles of water from the price of one of these. And look behind the can where I found it, yes it really says Wal*mart, the big American superstore. This Walmart is below ground next to a very fancy mall with utterly expensive brands. It's a certain place just outside the hectic shopping center, it is actually between the Lo Wu trainstation and the shopping center. Also rather be at this place because mainly allot of guards and less beggers.
review