Reflection from my eye 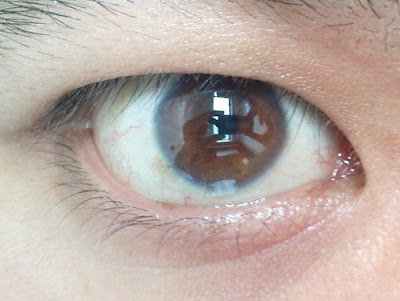 You can actually see that this image was made with my mobile phone. Also this picture have been cropped and resize to 50% so actually the resolution is pretty decent and good. However I did not photograph my eye for this reason, the actual reason is that my iris actually have a very different color than the iris from Asians in China.

My iris is brown but it is a much lighter shade then Asians in China, theirs are very dark almost totally black. However both my parents are Chinese so it is not an certain gene making my eyes to be lighter, but I think it is a bit cause of the environment I grew up, because I am not from China but from the Netherlands and there you have more rain then sun. And probably the people who grew up in China have a natural sunblock in their eyes since they grew up in a place with allot of sun and slowly adapted since their birth. My eyes did not have to adapt it self for the sun in the Netherlands so it did not became very dark.

However I am curious if my eye would actually adapt while I am in Asia. Also I have not been sunbathing allot so would be curious what my body does and how it will adapt it self to the changed environment.
events

Anonymous said…
Whatever reason you may have by taking that shot, I'd still call it a good shot!
4/3/09