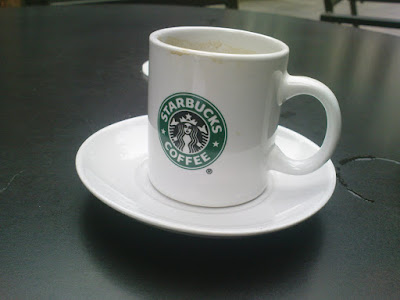 Probably the only real relaxing place sitting, drinking coffee, relax and can work on some sketching. A pretty relax place where not too much people walk by, making it super relax and also blocked most view from the where you would see busy traffics.

Ok, the coffee is not cheap but pretty good, I went to drink a Double Shot Espresso which is pretty interesting. Probably the most interesting taste I have tried when I came here to China, I actually wanted to try the double shot espresso for quite long time and finally went to drink it. It is actually a very bitter coffee, but with an aftertaste which is interesting, because of the bitterness the aftertaste is actually sweet.

It is actually a very very tiny cup, however Starbucks is probably only place you would see allot of foreigners drinking and actually possible place for me to network with other foreigners and talk with people in English.

Also got to taste a frappochino in a small version was actually to test it. It was not bad but the whipcream was not really needed. But pretty great a cold coffee drink. Maybe next time I would order a frappucino instead.

Actually most what I knew about Starbucks was that it is pretty busy with people getting normal coffee on the go. But I think relaxing sitting drinking your coffee slowly is a better choice then rushing it.
events