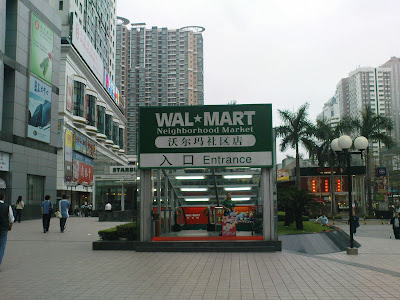 Wal*Mart 入口 entrance to got down to the neighborhood market with allot of imported goods and also allot of delicious Chinese snack and beverages and other products. And behind it a Starbucks cafe and a McDonalds, so you would feel pretty much at home if you are from America. Also you regularly see allot of foreigners there at Starbucks. To bad they have not developed a Chinese name for Starbucks and Wal*Mart because McDonalds you would only recognize the big M bit the name is replaced with Chinese letters.

One thing if you want to save money I suggest not going to KFC in China because they are pretty expensive, the cheapest meal cost 26rmb and you get a grilled chicken burger, a mango juice(somehow I could not choose what I wanted to drink) and a very tiny cup with corn, cucumber and carrot salad. Also it feels odd here you don't throw your garbage in a fastfood away yourself but in the Netherlands I am used to it. People look at you are doing something odd.
events