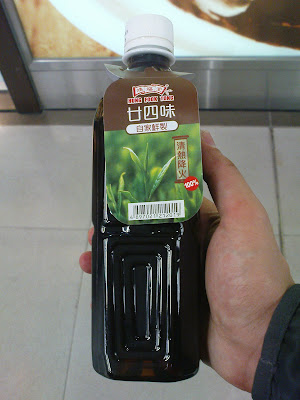 This is probably a drink that nobody would ever drink because they love the taste. The is probably the most awful thing I ever drank for a review. 24 herbs tea / medicine soup you can actually buy it warm or cold. As I said it is an actual medicine soup with 24 different ingredients, it is a healthy drink and often see mother buying it for their small children. However the taste and bitterness is just awful I can't understand anyone would be willing to drink it, however because I had to review it I had to drank the whole thing without actually adding sweets to it to lower the bitterness.

There is a whole list of things that it is good for: Cold and cough, fever and headache, eruptive disease, tiredness, infantile summer fever, pathogenic dryness and heat in combination, and constipation, eliminating dampness and heat, promoting the production of body fluid to quench thirst, halitosis, anorexia, abdominal dissension, fidget, lack of physical strength, dizziness, pimples acne.

However I actually gotten pimples after drinking in though. Seem also is not that well for my body seem to have a increased level of bacteria in my body after drinking it. I now need to control my salt level to decrease the amount of bacteria or look at other drinks. However won't recommend such a drink to anyone unless you have been sure when you have tested it does help you. Also for me the 24 herbs are unknown so look out and might need to ask what is in it because I don't know if they are good or not or if certain people might be allergic for it. In my case it seem to be bad for my body to drink it, and actually think my mother had been making this drink allot of time for my when I was little. So now find out that this drink is rather harming me than healing me.

The design is a simple paper label with information but not allot of information actually. I rather drink a double shot espresso that is sweet and bitter instead of this. Also there are other better healthy Chinese teas also Aloe Vera are better in taste and also less ingredient which are better known.
review

Anonymous said…
24 Herbs tea is meant to be bitter thus the health benefits! Dont be a wooz.
13/1/10