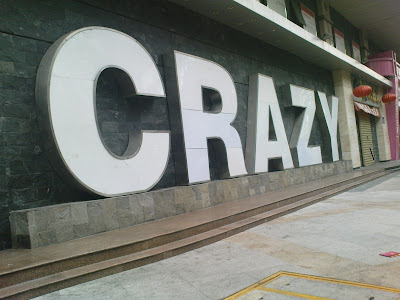 I have been in Shenzhen for some time and actually have made couple of friend outside of the work area, mostly because in the office most don't even know Cantonese. Also able to talk with different people and see how much difference there actually are between all the kinds of people. So it about time I would review the place and people and talk about the trends.

Scolded before you get to work
Daily I see often people standing in a row before a restaurant or a building or a shop, these are actually people who work there but their looks like getting some kind of briefing. However further notice and got more information about it and it is actually that they get scolded by the manager/ leader and get speeched how hard they need to work and stuff. However I find bit rude to be so hard on people, while it might be normal here to do that and teach them in a kind of way. But in Europe I have never seen this before mostly had work in a place where we get a briefing before work or just dividing the work and then just go to work and not get scolded at all until you did something that was really wrong. It seem to be a standard routine and actually people don't mind and pretty much laugh when they get scolded, it seem to happen so much that it does not matter. But for someone new it might scare them off, cause in the shop I had worked before there was a girl who got scolded on day one when she did something wrong and gone away and never came back to work. However it is something I never experience being a nice and good person.

Nothing is what it seems
However if you look at Shenzhen it might look like a pretty high tech and rich city however hidden behind it all are allot of different things. Cause allot of the people working there don't understand Cantonese and those are often people from the country side coming to Shenzhen to work. Also allot of people actually are bit forced to be working at a young age because their parent don't have to money to send them to a University or college. If you are actaully able to go to college , you are one of the lucky ones who could do more in life. However there are actually people who don't have a computer or internet or never ever used one before. However in Europe it is pretty much unheard of, but is it pretty much a fact that China is still not a 100% well developed country but their are willing to change and see much of it in the news. And rich and poor is such a big difference, because in the Netherland you could go to Universaty by getting money from the government to do it and if you get your diploma you don't have to pay back the money. However I think the government should have enough money to do that cause they lended a major sum of money to America and use pretty much allot to finance the Olympic event.

Fake European brands trends
However there are also companies who want to be more European in a certain way, but mostly for their own profit. Often you will see allot of store presuming that they are from a certain country however the name of it reveals something different sometime the name is pretty much made from the an Asian name but they just add a country name under it. Also you have some better ones which actually make up names that sound very European. I have actually met an example of a company that does that exactly, the company is called St. Louiston (St. as in Saint) which sound very European. While actually their site reveals it that they are from China, but this is a certain trend I am pretty sure of that is going to become bigger. Chinese companies will be trying to be playing as an imported brand to be able to sale their product for a higher price, but also to be able to export better to countries all over the world. Cause people around the world are afraid of bad quality things from China, so the Chinese companies have to adapt and try to present them selve as not from China. This probably be a major issue in the future I think, however it is a way for Chinese companies to be able to get big and famous across the world. Cause I think you would rather buy a product that is calle St. Louiston then if it was called something very Asian.

Fashion in Shenzhen
Also there are kind of Ganguro girl happing in China with extreme light brown hairstyle bit off trying to look like a gwai loo ( Western / European). At the moment in Shenzhen there is some kind of hot pants trend happening with the girls, they look like just wearing underpants most of the time. However cause of that look I am not so sure what kind of people they are... ehum... However for the rest you see allot of normal people wearing unbranded or fake stuffs. From what I have seen the most fashionable people wearing clothing close to fashion models are women who are about 30 to 40 years or young girl above 20 mostly walking with and old fella, mostly the dude who pays for their clothing. It is not a place where I could see new fashion statements, mostly old trends that have been very old and came from Japan a bit.

Myth of pretty Shenzhen girls
I don't know for what I have seen they are not that pretty at all. They might be in Asian of Chinese taste but from Europe I think they are pretty normal or even ugly. Mostly think it is just a big myth because I think there are more pretty girls in Hong Kong then Shenzhen. Even the pretty girl I saw in Shenzhen did not came from China but Hong Kong. However the prettygirls might be in places I would never go ( you know the more x rated parts of town or buildings). Cause also heard there are allot of business men who comes from Hong Kong to Shenzhen to get massages but mostly be partying and flirting with the girls who work at the parlours. It seem to some dirty part of the job too, but if someone invited me for something like that I would decline it in the first hand, I find it degrading people and rather be spending time with a normal girl friend then having to work for some dirty sleezbag.

A better next generation
At the moment China is not really much as a consumer market the people don't have much money and rather spend it on fake version or clothing that is cheap but wearable. I think it will need to take several years till China becomes a higher class consumer market, cause hearing that people can not afford a computer if pretty much like going back in time, while just across the border in Hong Kong also almost everyone have internet and also mobile internet to be able to internet everywhere, plus you have places in the malls where you can internet for free. While in China I could not find it in the plaza's. However it might even be the next generation untill whole of China be more wealthy, but if you look at the structure of the country you could say partial is bit off 3rd world, cause you have area's where people never seen technology before and live in mountains and still trying to survive growing own food and getting water from a well. However most are also old people, because the youngsters just go to the city and try to find a job or try to survive there. But in the Evolution theory the old people are probably going to die, the youngsters who find work in the city will have money to be able to pay for their offspring to have a better life and education. So it might be 10 to 30 years time in that this could happen or even a century but I am sure China is going to change allot in the coming years. However they are not leading any trends that could be a major hit in the world though.

Police and keeping to the law
The cops are mostly doing nothing but cycling around and doing actually nothing at all. You can see allot of people walking through red light while there are cops around and even littering. Only thing they cops are mostly doing is keeping away the bums from the riches. However pretty much not happining. Also a bit of catching people doing illegals sales on the street selling their own property. But mostly could see allot of lazy officers. You actually see allot of illegal stuff going on it is just too crazy how loose the law is here. I as someone who wanted to be a cop, can't really stand this stuff it is just made and totally against what I stand for.

Conclusion
For me Shenzhen is not my kind of town and if I look at my life back in Holland I had it pretty good there and pretty luckly to have been able to do allot of things also able to learn so much things even though I had learn most my self, but still to be able to learn english to use a computer to design with a computer and more. However I would rahter be in Hong Kong it is still mostly more of my place. However from what I can see Netherland is still much a pretty place and relax place to live compared to the busy Hong Kong life. However I think I can manage plus the town Tai Po is super and pretty much facilitate all needs I want and enable me to do even the hobbies I like to do outside of designing, like jogging and cycling. I hope I don't have to go to Shenzhen much often unless it is to shop or karting or playing but not to stay and live there.
trends

How to import Preset in Adobe Premiere Pro

In this video I am showing you how to import a preset into Adobe Premiere Pro. A preset is actually the same file for both Windows and Mac, unlike plugins which are computer specific as its has to do with programming. But a preset is a safe file of settings from Adobe, that why the same file is compatible on both platforms. Also there is only one method of importing a preset, so follow along with the video above to learn how to import a preset.

In this video we are teaching you 2 methods of fading in a Logo or Text in Adobe Premiere Pro CC. First we are showing a very very quick way that uses the Default transition short cut that automatically adds an IN /OUT cross dissolve to the text or Logo. The 2nd way we show you a more professional cinematic fade in method with key framing a ramp speed and adding also a blur dissolve using Gaussian blur.

If you appreciate what I do, you can support me by donating any amount here on paypal:
http://paypal.me/ChungDha

For any Questions Please Join our Facebook Group: https://www.facebook.com/groups/chungdhagroup

I am bringing Clarity to Adobe Premiere Pro, it's something I have been missing  as in Lightroom I often add clarity to improve the looks of my photo's, but even with the latest version of Premiere Pro CC 2018 where they have added shadows and highlights and such, but the clarity effect still was missing. On my own found a way to create an effect that is quite similar to Clarity.