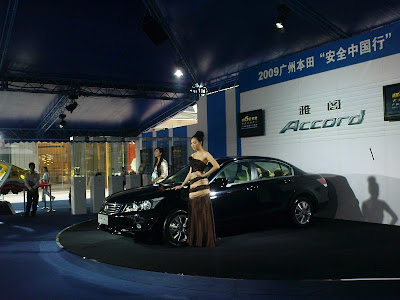 During last weekend there was a car show / presentation in Shenzhen just before the King Glory Plaza and it was a kind of opportunity to do some research on the crowds behaviors. As in previous post I have mentioned people are too busy too look around and is pretty much the big behaviors that cause it that there were actually not that much people watching this. Only during presentations when they put on the start up tune people arrive however the head counts never exceeded over 200 people. Also when there was no show element the head count were under 50 people. Also there are far to little posters or things that would show people that there is a car show or actually point to that there is a car show.

Wrong target market area
From what I have seen was that it attracted wrong kind of crowds. Actually did a whole building research and would had made more sense if they put the cars inside. Cause actually the people who can afford cars are also the people who have cars and they all were inside cause of the underground car park, they also don't come outside that easily cause they rather stay in the refreshing air conditioned building. They would likely peek a bit at the door and then walk further in the shopping mall, some dared to walk outside just to ask for the prices and then walk back inside. 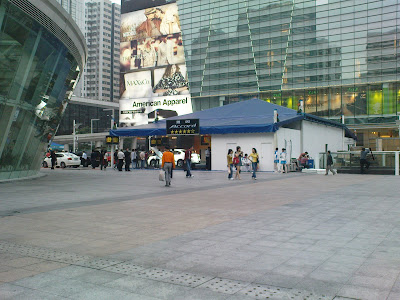 The most people that arrive are people who were waiting for the public transport buses that are stationed next to the building. And instead of waiting for the buses they go to the presentation and see what is going on to kill some time. Furthermore under the square is a underground metro station and pretty much people arrive from there. From what I have seen is there most people do not arrive through the main entrances.

Also the mall might look like it self mainly big brands but if you go below grounds you have allot of smaller well named brands but also a level with restaurants or fast food places. Mainly the main attention to the building is just the food and sales of things. Rest of the building and levels are particularly less busy with only just a hand full of people walking.

The square is mainly a resting place for people who are working close by just sitting around a dry fountain and the benches that are placed. The square is pretty much a dead unused big open area. However it is peaceful to sit there but it is not place that attract much crowds. They could had place this at the Lo Wu entrance and exit where there are actually much more people walking by.

Also the cars are more aimed at business men while actually they have not that much time to be spending a free day for shopping they would rather be relaxing at home. If they had targeted young people the and placed a DJ playing some cool songs the whole day it could been much better.

Hard to read male 40+
The male above 40 are hard to see if they are wealthy or just a slum, cause even though they might be wearing brands they could easily be wearing fakes. Also they can real clothing that should be cool and look like a slum wearing it. Actually the gold en the bling bling is pretty much MIA ( missing in action), cause I had heard business men like to show off their wealth by wearing Rolex and expensive goods. However it seem that in the free time they wear super normal and don't look anything like someone that is rich.

Easiest to read female
Females are the easiest to spot what kind of people and which level of wealth. Mainly see in way of the clothing styles and skin tones. The whiter the skin mean that they do not have to work much an be outside allot and mostly see them wearing extreme fashionable clothing and looking allot like a model, most of them are actually attached to a wealthy men or they are a fashion model. However the ganguro girl the brown hair with hot pants are not that much in this part of town I have only seen a few walking around. Also allot of mothers with children shopping around, however for what I have seen are that they are not wealthy ones, cause of the toys and children clothing and their own. Wealthy ones would have their kids well dresses in most super branded clothing and looking super hip and fashionable. Inside the mall you can spot allot of those plus parent making photo's of them with a pro camera as their children are fashion models. Also irritating is that most of the parent at the show does not hold their child from going on to the stage while they were presenting. 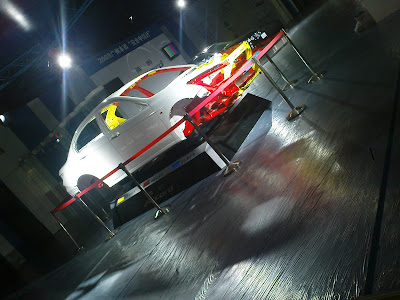 Too touchy
Never place toys which are just for show without a glass box barriers all around it ( in a show or trade fair in China). People actually want to pick it up and play with it and could also damage it too. The girls working there had their hands full of keeping peoples hands of a small scale model car. Not only children want to play with it but also grown ups. And people want to touch things too much and also try to break things. Cause there were two cars that are partial here below one that is halve open and one with only the frame here above. People actually wanted to see how sturdy it is and try to push, swivel en pull on the parts. And actually look allot like that they were trying to brake it and then say of that must be rubbish cause it broke. Also they opened the doors of those cars. 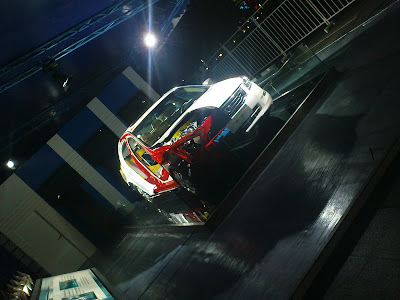 However this halve one with all the engine part in it but halve the bonnets and halve the interior is able to drive around I saw it actually riding away should had actually made a picture of that.

Time is of the essence
Actually there is a kind of certain times where there are more people and give a bigger attention to the show then other times. However the opening is just between 18:30 to 21:00 where people are actually going to the mall to have dinner or actually going home after work and walk past the show. During the mornings and midday is was pretty dead around the show, only just a hand full of people walked around or played games on their special displays.

Greedy people
The people seem to be greedy on getting free stuffs and they want to win a whole car or get some free big things. Also seem allot of people don't understand what such a show does. Also actually having staff looking around if there are no pickpockets, cause people who watch the show tend to not look at their belongings. 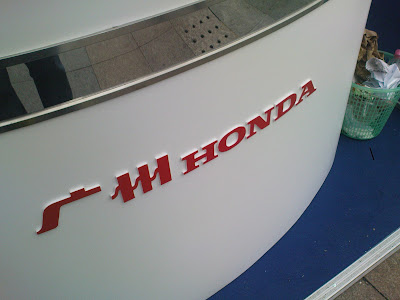 Littering
Actually allot of peole just went to the show cause there are chairs placed by Honda just to rest and sit there to have a break. You could see people also smoking in dropping their sigarets and garbage on the carpets. Also really the people in Shenzhen still have disgusting habbit if spitting everywhere and making those major sound gurgling the spit out.

Too little preparations
I find that the people use too little to prepare this event cause what I have seen is that there are allot of elements missing also the prices of the cars, and people had to ask the staff each time how much a certain model would cost. Also no real schedule stating when a show would start and mainly seem to be bit decided if the staff want to do it or not. And signs places in placed to redirect people from walking to the city center to walk to the car show.

Conclusion
I doubt they sold allot of cars using this show, they might mildly made people interested. But I think only a very small percentage would buy the car who had seen this show. Such thing should be just held in a car fair and not in the open public unless their is a real show that would attract people the whole time until it closes. The square is pretty much a misleading place, cause it looks like it is a very great place to do any promotions but actually there are not enough people who walk or use that area. In the Netherlands in Rotterdam you also have such a square next to the Palet movie theather, but unlike this car show in the Netherland they do allot of advertisement en things to acknowlegde people of certain events that would make sure that thousands of people would know of it and would want to see it too. However it is just extreme that there are allot of homeless people in the city and people who commit crimes stealing and pickpocketing. I rather be in a saver city and with also nicer people. But will be back in Hong Kong pretty fast and won't come back to work or live here, but maybe just for shopping and playing around.
events