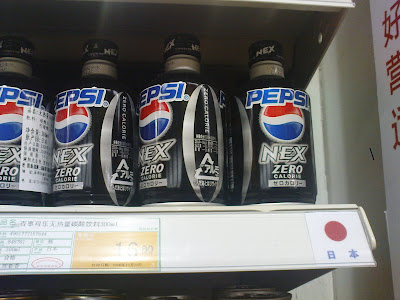 However I am reviewing this bottle without buying it, because 16.90 RMB is pretty expensive for a beverage while you could get halve liter bottle for just 3 RMB. However this Pepsi bottle is all the way imported from Japan and sold in Shenzhen Vanguard superstore. It is actually a mix of a bottle and a can, or a can with a bottle neck. However I don't think Coca Cola would be all that happy seeing Pepsi copying zero calories beverages.

The graphics is done pretty good and very sporty but it is still using the old logo though. I don't know when the new one would hit Asia. But the thing I don't like the most is that is it such an odd shaped aluminum bottle, because most look like an actual bottle but this is just a can with an bottle neck on top. However the design might fit people who are on a diet who want to drink carbonated sweet beverages but don't want to sip it all up in once, cause the bottle neck got a reclosable cap on it and it not like most where you can pull of the cap but not reclose it.

Also the graphics play and optical illusion from a distance you thing they got a slender shape cause of the line shapes. However would rather have seen then actually using special shaped bottles instead.
review