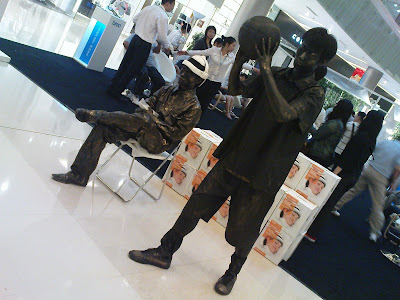 Living sculptures in Shenzhen King's Plaza, however these things are pretty normal in Europe was first time actually I saw it in Asia. Because in Holland and especially in Amsterdam on the Dam you have different and allot of people standing still as sculptures and trying to get money doing that plus the attentions for it. However it seem these guys are bit too boring here and actually not getting much attention at all. Rather see some robotic sudden movement scaring the heck out of people who did thought they are sculptures, which most do in other countries. Because that give most attention and it is fun too see.

This performance art have a message in it, look how unfair the guy sitting got it most relax with eyes shut and getting a head massage, while the other has to hold a ball plus with eyes open. However the guys is blinking far too much and making less real sculpture. So giving you the impression which guy you would want to be the one who is relax or the one playing basketball. But seem to be bit of an odd message though.

Also this reminds me of Gilbert and George who is famous for their performance art, having painted themselves in a metallic gild color like these guys , but then wearing fancy suits and not just standing still but singing for an extended period. However Gilbert and George have been doing it since 1970. And now seem to be less of an art form because too many people over the world does it now.
events