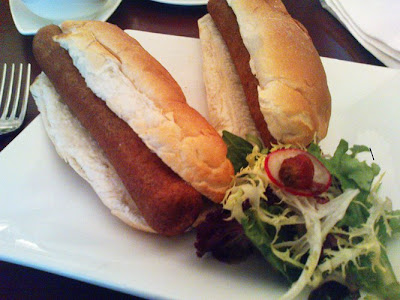 Last weekend I went to Orange Tree at Central Hong Kong Island. You can get there with the longest escalator. It is on the Shelley Street and at the most top of the street. You can actually order Dutch snacks/meals like Kroket, Frikandel and more.

For 88 HKD you can get 2 buns with certain Dutch snack, I choose 2 Frikandels. Which are deepfried meat sausage, the ingredients is pretty much unkown, always been a secret but actually very delicious. Too bad missing some allot new kinds of Dutch snacks, but pretty much have covered the most well known ones. You also get saus to add, mayonaise, ketchup, mosterd and sliced unions.

However snacks mostly in the Netherlands are not that expensive cause you can actually get a frikandel in a bun in the Netherlands for just about 2 euro. However pretty much got to do that this is a fancy restaurant and not a snackbar. The main chef and boss is a Dutch guy, the menu is written in English with English descriptions of the snacks but with the Dutch name. So no Chinese written menu, pretty interresting place to find a little bit of Dutch in the Central of Hong Kong Island.
events