7th August at Camron Road, Tsim Sha Tsui there was an exhibition of a friend of mine, Wing Liu a Photographer who had lived in England, The Netherlands and now in Hong Kong. This exhibit shows pictures that he had made on the streets in Hong Kong and printed on shirts which are for sale. I filmed this event and made this clip above. I've met Wing while we were waiting for the shuttle busses at Tsim Sha Tsui to go to the Adidas House Party. 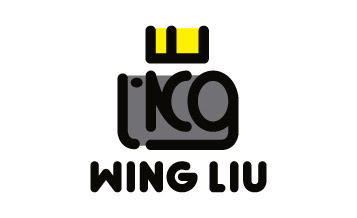 I also designed his logo which is a 80's styled design. The logo illustration is that of a DSLR camera which is build up from the name Wing. It is a simplistic logo without to much things added. Type face is not from a font but designed by me cause I wanted to have a W which would sit nicely with the i. Also some might think why not just write only Liu below while on top it already says Wing, the problem with that is that not everyone is that bright and knows that the illustration actually is saying Wing. And basically all logo should have a very readable section for the name and people can read the name fast without having to figure out what is says.
events logo movie portfolio