Newest DSLR to the CANON EOS line the 60D, from rumors from begin of the year we knew it was coming with a swivel screen. However it sits new between the Professional 7D and the semi Pro 550D. The new EOS 60d which is the replacement of the old EOS 50D will cost in Europe around 1149 Euro. View sample pictures and videos of this new camera here. 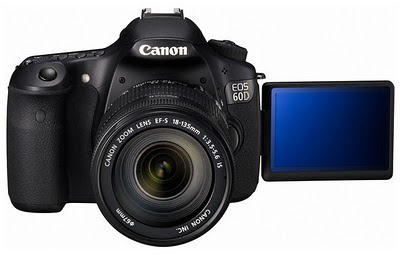 However have to say the features are less than the 7D which have 8fps and 19 points cross type AF. It seem to be a more of an upgrade 550D than 50D, cause the old 50D had 6.3 fps however its seem to be a trend to make the xxD series slower cause the 40D had 6.5fps. Also have to say that this camera have gone from pro to a more semipro/ amateur range but yet it cost more.

Special features they added are filter which are not picture styles but special filters to get the old 35mm film grain and fake tiltshift which they call toy look. And instead of Compact Flash its will use SD/SDHC/SDXC, with SDXC you can able to have much larger storage and faster speeds than with CF which also is a feature in 550D.

However owning a 550D the new features does not make me want to upgrade to the 60D yet. The thing is that its just a mix of 7D ad 550D features and specs with added swivel screen. Yet the screen is not enough to say I want to change to this camera. I think people would pay few hundreds extra and buy the 7d with a much faster spec for Photography, while cinematographers might buy the 60D for it swivel screen meaning not having to add an extra monitor to the camera. Yet most beginning film makers who don't need it would use 550d. However a tip is around the horizon are still few new camera's coming from Canon and especially need to see what the 2000D brings us.
tech