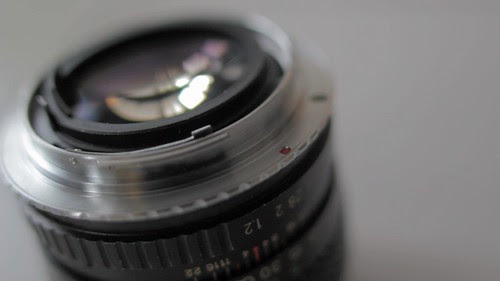 I have been collecting old manual lenses for a while and have almost finished collecting about all the lenses I actually want to have, there are still few out there which are a bit hard to get my hands on in the Netherlands, like Vivitar Series 1 28mm f1.9 which has the most crazy bokeh there exist. But back on topic, I have 3 lenses which uses Pentax K or Bayonet PK mount which I use on my Canon EOS 550D. Yes, I am using Pentax lenses on a Canon, which I manage by using an adapter which I bought. However the lenses are quite great there is a bit of a problem with the adapter not sure if it is just the one I got, so I have to buy or test another one to see it. However you can buy an adapter about 20euro online which does not have an AF or Focus confirmation chip, cause if you want one with it its about double the price. View the video below for more information.

I was actually very lucky able to buy that lens for very cheap will do few other adapter reviews first before I start reviewing the old lenses. I have two m42 adapters which one does have the chip which also bought cheap. And an Olympus Om adapter, which I ordered online and was most expensive one I've got.

However you might ask why not use old manual FD lenses from Canon self to use on a brand new Canon Digital SLR. The problem with old Canon camera lenses is that the old camera with FD mount have a mount which is closer to the film which in digital terms much closer to the sensor. To be able to use the lens you have to use an adapter with a glass which changes the focus point, however these glasses are very low quality, so you will loose detail and also few stops.

You might also know there are also Nikon lenses which you can use an adapter to put on a Canon. There is not much of a problem with this setup but the main things is that old Nikon fits on New Nikon camera's and the problem is that the lenses are quite expensive even the very old ones. And there are also few others mounts like Leica lenses which are probably the most expensive of them all.

Have been doing these vids alone and doing it without scripted and seem not really doing it yet, its still bet amateurish. Next review I will try a scripted one so especially I wont be talking double might even best easier to talk also when it is scripted then having to think what to say.
webshow