on March 28, 2012
These are just some funky ideas that could happen in the future.

Extend memory cover, as there are iPhone covers which extend the battery life of the phone which actually could be made for iPad but have to say the iPad does not use that much power as it is not really needed. But have to say I would not mind if someone build a cover which has built in card readers and the USB. As the standard sd card reader you can buy sticks out allot and would not really keep it on the iPad nor does allot of covers have space for you to stick the sd card reader onto the iPad.

Wifi drives, wireless external memory but not meaning iCloud where you need Internet to get access to you files, cause Internet speed is never going to be fast enough to simply transfer huge video files. So in the future be either through a wifi link up with a external drive.

Wifi blu ray or DVD players, as the monitor be improved on the newer versions people would want to look at movies using the iPad and converting and putting it on the iPad be such a pain and not all locations you would have access to Internet nor you want to use up your data limit to watch movies which actually be pretty fast to use up. So you want to have a external optical drive that has a built in battery and wifi to connect to you iPad do you can watch movies this way. Or it be a cover with the built in optical drive and power supply.

Polaroid cover, a cover on the back which could basically print out pictures you took with your iPad as the new iPad has a better resolution to take pics it be great to print them out, however Polaroid and Canon do have a Bluetooth portable printer on the market, however not one that you can stick onto your iPad. 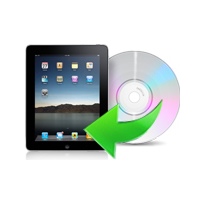