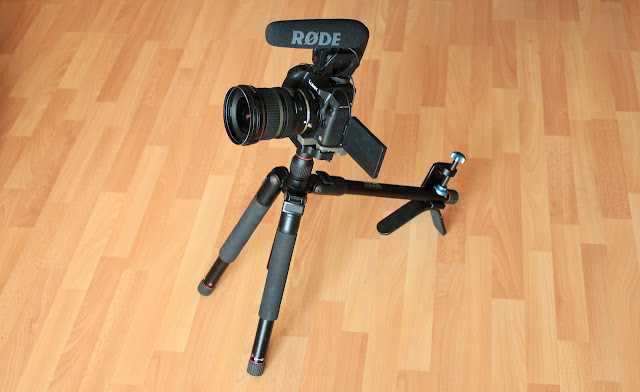 This is an idea plus something I actually have used on few occasions while I needed a tripod to shoot a very steady shots but right after needed to shoot guerrilla style inside shops quickly and would not be able to setup the tripod and also don't have time to put away the tripod, so it would be easier to just to use the tripod to hold the camera more steadier.

But I think I am the first to have altered a tripod to be used this way as a shoulder rig, there been other using tripods as a shoulder rig but looks less like a shoulder rig as they just collapse a tripod and put it on their shoulder and have only a single handle. Also I don't think any tripod manufacturers have though about this simple concept, cause I think there might be a market out there for this simple design. As it is multi functional and you can carry less equipment around, but probably would need to add more mounting point to the tripod so you could add certain accesories or at least a counter weight on the leg with the shoulder pad. 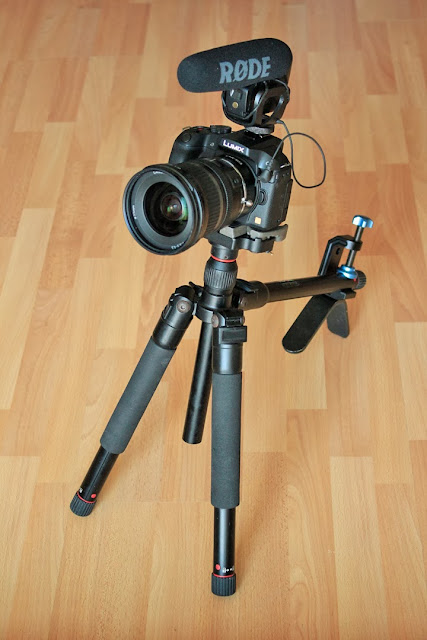 If you want to make this, its the best to find a tripod that can collapse the legs up  which make it able to get also the 90degree angle, however you should find one which can lock it in certain degrees as it would be able to lock the legs in the positions you want. The c-clamp and the lens support bracket I am using are quite hard to find online and I only know few shops in Hong Kong which sell those. However without it is also workable to but with it is feel and holds your shoulder better. But you could DIY a shoulder pad together with some rubber foam.

I could not find my Tripod the KEEP D'Classics which I bought in Hong Kong, but I think this Cullmann Nanomax 200T could possibly do the same as the legs can invert collapse. But maybe some manufacturer would find this post and video and make one of their own.
doityourself