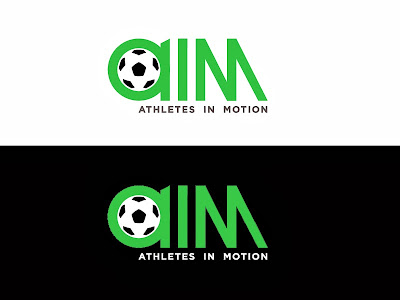 Haven't lost my touch yet in Graphic design, so gotten few email about some contest and see if there were few interesting ones I feel that I could probably win with a great looking logo. Well here is one for Athletes in Motion. While others were making fairly standard soccer logo's I use my standard tactics as I always do is to use the Initials not only to make the base of the logo icon but have it also illustrate a meaning. Cause athletes or drawing olympic sport figures are too many out there already and and I don't feel like it should have a crest as this company is not a soccer club but a company that does allot of things with soccer related activities. I found that inside a there is a space to put a soccer ball. However the first version I made a more rounded M but the more I look at it it didn't felt right and remoulded this current M which now if you look better represents the net of the Goal. Now if you do not look at this image as word but as an illustration it looks like a zoomed in shot that crops a section of the goal with the ball that is about to go in. 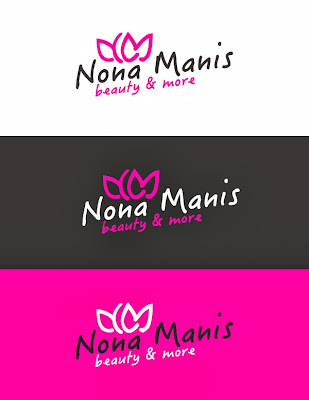 Another logo entry for a contest is this Nona Manis, which in their briefing wanted a lotus flower in their logo and the company does makeup and have a nail studio. However they don't want to emphasise on a certain make up but more open so they can change and all different kinda of beauty products or services. As always start working on research which logo exist already, however the big issue is they want a lotus flower and there have been many that already uses a lotus flower as their symbol. As also I saw many other entries making the mistakes of replicating what already exist. However my approach is different and I know it most of the time people would not explore it, it taking the initials and search for something related to the illustration they wanted. As NM it self put together already look like a flower, I explored further in adapting it to have the shape of a lotus flower.

While this one is my first version and the one above it is the latter, as the contest holder wanted a chique logo, I made it to have a very high class make up brand feel and have to lotus flower stand as not only a flower but also like a small crown on top of the logo. However looking at the rating the contest holder gave me and at other scores of other logos. It seem Chique wasn't the look they wanted at all and it was to be more feminine. Hence the second design above which, would be more artistic feel as its more of a handwriting which could be that the logo is more like a signature. And I gave it a slant to accentuate that its more of a signature as most people would not alway do it perfectly horizontal.

Both logo's I feel like I have done my best to give them a good looking original logo. However currently they still need to decide the winner.  However I do feel like most of these contest holders often have quite bad taste for a logos and mostly not even choosing something that can be called a logo as the design would be overly done or a designs that is impractical to transfer over to different mediums. As overly detailed illustrations with tons of gradients, the price for printing cards be more as its printed in CYMK and even vinyl cutting for on windows or the logo signage of the store will be just more expensive. And often most who design those kinds of logo's don't think about all the print medias especially making it overly detailed with too much color is not worth it and often can't even be translate to a Black White version without looking odd. However I would try to never exceed over 3 colours and easily be used even monotoned colours. But have to say currently there are tons of new designers who doesn't know the essence of what a logo is, and tons of start up company who don't know what a logo is either and how it can effect the company choosing a certain look and overal trying to print out in different media. As a printed vinyl sticker cost much more and have much more steps to it when making it, its much cheaper to cut out the right color and shapes for coloured vinyl then having to print the colours.
logo