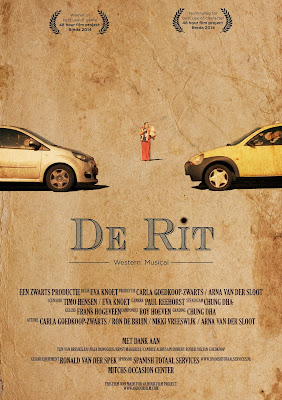 Our team Zwarts Productie won the "Best Use of Genre" and we are nominated for "Best use of Character" during the 48 Hour Film Project in Breda. It was quite interesting as we had probably the most reaction during our film and which kinda made people miss few of the dialogs but was able to convey the right message over. And watching all the films I was able to really see all the competitions and only 2 films really stuck perfect to the movie genre and one was ours. However I thought we had a higher chance in best use of Character however there were few who literally were able to get an actual Taxi cab including the uniform. But the competition was quite high as only one of the 17 teams did not send in an entry and only one was clearly shot with a mobile and one was unclear if it was a camera or webcam as it was a static shot without the camera moving even on inch. And one was clearly shot with Black Magic Cinema as it had the most dynamic range and able to have allot of details in the shadows but only thing was their movie the sky was cloudy while are 2 days of the 48hours were very very sunny without any clouds in the sky. But most were able to see shot on GH3 being not only flat but have the AVCHD graytone look and whole bunch of Canon DSLR or Cinema Cameras. Also several movies included a drone shot in their movie, we had a drone on set too however, the flyer isn't experienced enough and the drone wasn't balanced as well. However resulted that I atleast were able to do one steadicam shot which replaced the drone shot. Overall was quite an ambitious choice with our genre as personally wouldn't have chosen Western Musical as its one of the hardest to do but have to say we were able to actually achieve it though and won the Best use of Genre award. Next one will be in April at Nijmegen and will be joining another team and hope we will be able to do even better.
portfolio