on July 05, 2018
I have received my Youtube Silver Creator Award a while now, but since Youtube have changed their Play Button in 2018 and its actually doesn't look that great, compared to the buttons they have released before, but also it collects dust quite easily. 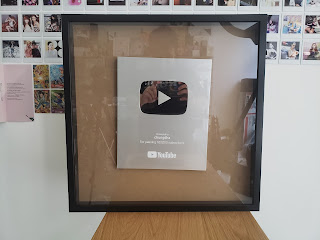 So I had an DIY idea to placed mine in an Ikea Ribba Picture Frame, which makes it looks nicer and even more of an award and also look slightly more like the previous award which comes in a frame also. And to hang the Award inside the Ribba Frame, I used 3M hooks as the back panel of the frame would not have much space for screw or nails.

If you appreciate what I do, you can support me by donating any amount here on paypal: http://paypal.me/ChungDha
2018 creator award diy framing ikea picture frame ribba youtube youtube award youtube button